Italian diva LaLa McCallan has a vocal range across three octaves. She sings a wide variety of styles: jazz, pop standards -- even opera. In the photo at right, she is performing in "LaLa and All That Jazz."

LaLa has posted video of herself singing Carole King's "Natural Woman" in English and "Casta Diva." You can also watch a brief English language interview with the singer.

According to her website, LaLa moved to London in 1996

to study at Mountview Theater School where he graduated in Musical Theater. After the first professional engagements in Great Britain, Daniel successfully auditioned for a series of revue shows with Royal Caribbean International. In the following years, he moved on to Celebrity Cruises Inc, and travelled through half the planet as lead singer of no less than 14 musical revue shows.

In 2003, she returned to her native Italy and performed in a number of revue shows, three concert series and a touring production of "Jesus Christ Superstar."

As her website proclaims, LaLa has an "endearing self mocking sense of humour" that makes her a prime candidate for The Cover Gurlz. As the photo below reveals, the Diva is also known for her fabulously extravagant wig designs. Find more photos like this on her website gallery: 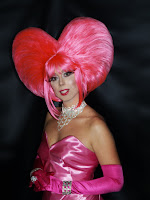